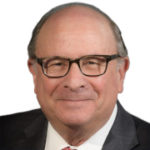 Robert (“Bob”) is Chairman, Chief Executive Officer, and Chief Investment Officer of First Long Island Investors, LLC, which he conceived and then founded with Ralph Palleschi in 1983.  As the Chief Investment Officer, Bob oversees all investment decisions.  He is committed to leading by example, treating each client with the utmost care and dedication, and constantly encouraging the entire team to make every client feel like a member of our extended family.  He works closely with our clients and provides guidance on all aspects of their “wealth of life”, including asset allocation and investment strategy development, family wealth planning, estate and tax planning, and much more.

Prior to starting First Long Island Investors, Bob worked for Entenmann’s Inc., eventually becoming Executive Vice President and Chief Operating Officer. He positioned Entenmann’s for both its initial public offering and sale to Warner Lambert.  He was Co-Chairman and Co-Chief Executive Officer of the New York Islanders Hockey Club, L.P. from 1992 to 1997. Bob was also a member of the Board of Directors of W.P. Stewart & Co., Inc. from 1993 through 1998 and Chairman and Chief Executive Officer of W.P. Stewart Asset Management (NA), Inc., which he helped take public in 2000.

Bob is a member of the Board of Overseers and the Board of Trustees of Northwell Health, as well as Co-Chairman of its Investment Committee, and Vice Chairman of the Northwell Health Foundation. In addition, Bob serves as lead director of Systemax Inc. (NYSE: SYX) and is Vice Chairman of the board and Chairman of the Endowment Committee of Hofstra University. Bob graduated cum laude from Boston University and received a J.D. degree from Hofstra University Law School. He was admitted to the New York State Bar in 1975. Bob breeds and races thoroughbred horses.  He also enjoys golfing, collecting art and is an avid traveler. In 2014 and 2015 Bob and his wife, Jodi, took two separate trips around the world.