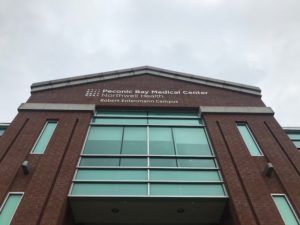 Peconic Bay Medical Center honored the late Robert Entenmann, a founding client of First Long Island Investors, LLC, by naming the new administrative campus after him.  After Mr. Entenmann died in 2016, his children Jackie and Robert, through the Robert Entenmann Advisory Committee, recommended to New York Community Trust that a gift of $5 million be made to PBMC’s New Era Campaign benefitting cardiac care for the region.

Robert D. Rosenthal who is Chairman and CEO of FLI as well a Trustee of Northwell Health (of which Peconic Bay Medical Center is a part) along with Ralph F. Palleschi, President and COO of FLI, and Edward Palleschi, Senior Vice President at FLI, attended the dedication with Robert’s daughter Jackie and members of the community.  In his address to attendees at the event, Bob Rosenthal said “He [Robert Entenmann] was a man of conviction, a patriot, a man who believed in business ethics and most importantly he believed in quality – whether it was quality in a boxed cake we’ve all eaten for God knows how many years or whether it was quality in the wine he made at Martha Clara Vineyards, or his desire to have quality health care on Long Island.”