How quickly 2017 came and went with many positive surprises for our clients (our numerous defensive and traditional equity strategies delivered estimated performance of more than 20% net for the year*).  But was our strategies achieving all-time year-end highs such a surprise?

As I looked back to last year’s thought piece, certain things jumped out after the surprise election of Donald Trump.  From a historical standpoint, stock market returns when all three branches of government are controlled by Republicans have been decidedly positive (averaging 19%).

2017 did not disappoint as the S&P 500, Dow Jones Industrial Average, and NASDAQ  Composite all hit records on a repeated basis despite fears of President Trump’s “unique” style, which many of us still need to get used to.  As suggested last year, the President’s pro-growth/pro-business bias resulted in deregulation in numerous areas, which fostered business confidence.  Congress and the President were set on achieving major tax reform, which was accomplished in December.  This reform is very pro-business (big and small) and attempts to be pro-middle class, but that remains to be seen.  In any event, the deregulation and tax reform has led to increased business optimism.  Additionally, the average consumer confidence level in 2017 was the highest since 2000. 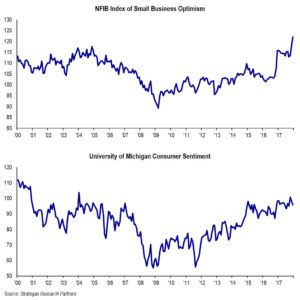 The economy no longer needs to depend solely on monetary policy on steroids (well-below-historical-average interest rates).  A fiscal growth package is now reality, although the extent of its benefits require responsible actions by corporate America.  What will CEO’s do with increased after tax profits and repatriated cash from overseas?

In addition to the above, between the easy monetary policy continued by Fed Chairperson Yellen (President Obama’s appointee) and the actions taken by the current Administration, our domestic economy broke out of its economic malaise, growing by an estimated 2.3% in 2017 after eight years of 1.5% subpar average annual growth.

Add to this domestic performance a global growth renewal from Europe and Asia (led by China) along with some unexpected growth from Japan and it is no surprise that both domestic and foreign companies on average had earnings growth which contributed to strong stock market performance on a global basis as new highs were reached.

So in spite of President Trump’s bluster and tweeting as well as continued heated exchanges with North Korea and ISIS inspired attacks,  positive economic forces along with improving consumer and business sentiment contributed to an excellent year of asset gains in equity markets, housing, and certain commodities!

However, throughout the year investor uncertainty was palpable, unless one clearly had a handle on fundamentals and somewhat of a deafness to the political noise.  2018 will not be any different in terms of “things” to worry about, while also balancing this with some undeniable strong positive factors.  So, let me put forth the proverbial “wall of worry” that we see this year (we will follow-up with the economic positives): 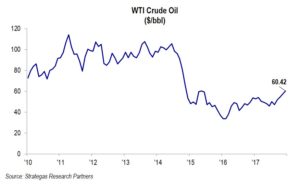 As stated earlier, investor concerns in 2017 were palpable.  Now more and more pundits (David Tepper, famous hedge fund manager of Appaloosa as an example) are stating that markets are not that expensive, tax reform will help earnings, and the global economy is growing in sync!  I liked it better when most were either negative or at least more cautious on the market.

There are less obvious worries that we can think of as well as those that can come as a surprise, but those noted above are sufficient to get our attention as investors.  Now, let us counter this wall of worry with some obvious economic positives: 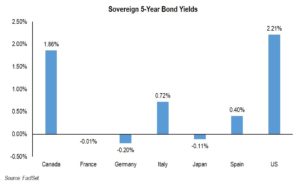 As the introductory quote suggests, we need to accept that investing, especially after a year of strong gains, will always come with some uncertainty (the wall of worry), but we can take charge by employing a prudent asset allocation.  Those who have stayed on the sidelines are scratching their heads and missed out on a banner year for many investors.  Our clients’ assets have been fully invested, for the most part, but with a definite bias to our defensive basket.  This certainly has not hurt as our two internally managed defensive equity strategies averaged a 20%* net return for the year.  Our traditional equity strategies fared somewhat better with an estimated average return for the year exceeding 22%* net.  Assets in these two baskets (defensive and traditional equity) represent the vast majority of our client’s FLI-managed assets.  Fixed income returns were of course much lower (low single digits) and our externally managed defensive strategy did reasonably well with an estimated net return of 8% for the year.  While our private equity investments for the most part made progress, we suffered one casualty and have for the most part exited this investment (we did take some losses last year to be used as a partial offset to our gains in many other investments).  Fortunately that investment is quite small (approximately 1% of the total assets we oversee).

For 2018, we are still defensively minded but believe our defensive and traditional equity strategies will outpace cash and fixed-income investments.  The companies in these strategies should benefit from synchronized global growth, stronger corporate balance sheets, and tax reform, while having valuations in an acceptable range given the current rate of inflation and interest rates.  This squarely puts the burden on us and the managers we work with to be selective and concentrated in our portfolios.  As we expect some greater volatility going forward, strong fundamentals are needed to weather the occasional storm.  Also, we believe that if the corporate tax reform is utilized in a pro-growth manner, value-oriented stocks may outpace growth stocks which would reverse 2017’s significant growth stock outperformance.

Also worth noting is the improved performance from international equities which since 2008 have lagged, on the whole, domestic stock indices.  Finally in 2017 they awoke, outpacing the S&P 500 by 5.4%.  (This is a significant rebound considering that the compounded annualized return since the start of 2008 has been 1.8% per annum versus the S&P 500 Index at 8.5% per annum.)  With economic growth fueled by a combination of continued earnings recovery, multiple expansion, and generally accommodative monetary policy, international stock markets are gaining traction.  We have noted in our quarterly letters over the last year.  Accordingly we increased our international exposure during 2017 and continued that refinement at the end of the fourth quarter.  International valuations appear somewhat more compelling than domestic indices.  Of note, many European sovereign debt instruments have negative yields (short term) and below two percent yields for ten years, which makes high-quality European and U.S. stocks attractive on a relative basis with current and growing yields (in some cases) well above two percent.

There is a formidable “wall of worry.”  This is not new and we as investors have faced it every year for as long as I can remember.  Our first priority is to preserve capital and therefore it is critical to maintain a prudent asset allocation.  That is why we continue to overweight our defensive strategies while somewhat underweighting traditional equities.  We also continue to underweight fixed income as yields for five-year U.S. Treasury and AAA municipal bonds are below the current inflation rate, on an after-tax basis.  Buying bonds below the rate of inflation compromises buying power and does not build wealth, in our opinion.  We also continue to favor certain private equity investments including our participation in mezzanine real estate financing, which provides some current income and the potential for additional returns as investments are completed.  This, along with exposure to leading alternative investment strategies, provides us with some diversification from stocks and bonds.

Investing always carries with it a certain level of uncertainty if one wants a reasonable return that exceeds the rate of inflation.  We live in a world where people seem to generate much of the uncertainty, perhaps needlessly.  Economic uncertainty coupled with geopolitical stresses (North Korea and ISIS) and our own political acrimony must be navigated with a view to the long term.  Otherwise, too many investors over the long term will be on the sidelines scratching their heads and missing out on returns that exceed those from cash and most bond investments, but they will not be clients of First Long Island Investors.

Here is to a good 2018.  Please call any of us on our investment committee for help with your asset allocation, questions about any of our strategies, or any wealth management needs.

*FLI average performance figures are dollar weighted based on assets.

The forecast provided above is based on the reasonable beliefs of First Long Island Investors, LLC and is not a guarantee of future performance. Actual results may differ materially. Past performance statistics may not be indicative of future results. The views expressed are the views of Robert D. Rosenthal through the period ending January 11, 2018, and are subject to change at any time based on market and other conditions. This is not an offer or solicitation for the purchase or sale of any security and should not be construed as such.  References to specific securities and issuers are for illustrative purposes only and are not intended to be, and should not be interpreted as, recommendations to purchase or sell such securities. Content may not be reproduced, distributed, or transmitted, in whole or in portion, by any means, without written permission from First Long Island Investors, LLC.

All performance data presented throughout this communication is net of fees, expenses, and incentive allocation through or as of December 31, 2017, as the case may be, unless otherwise noted.

FLI believes the information contained herein to be reliable as of the date hereof, but does not warrant its accuracy or completeness. This communication is subject to modification, change or supplement without prior notice to you. Some of the data presented in and relied upon in this document are based upon data and information provided by unaffiliated third-parties and is subject to change without notice.

NO ASSURANCE CAN BE MADE THAT PROFITS WILL BE ACHIEVED OR THAT SUBSTANTIAL LOSSES WILL NOT BE INCURRED.