“We always live in an uncertain world.  What is certain is that the U.S. will go forward over time.”  Warren Buffett

Robust results were recorded in the first quarter by equity markets following a very difficult fourth quarter. (Our clients enjoyed meaningful gains in all of our equity strategies in the first quarter.)  Fourth quarter fears of higher interest rates, an imminent recession, political uncertainty over the anticipated Mueller report on whether the Trump campaign colluded with Russia, a slowing global economy, and continuing uncertainty about trade with China led to a severe decline in equity markets.  In addition, the mid-term elections were contentious and led to a shift in power in the House of Representatives, which also concerned investors.  We believe this severe market decline was disconnected from underlying company fundamentals as well as the general domestic economy.  Our results for our clients in the first quarter, and those of the equity markets in general, suggest we were right, at least for now.

Domestic equities continued to outpace international equities, although both recorded significant gains.  (We continue to underweight international equities.)  As has been the case for a number of years, domestic growth companies continued to outpace domestic value companies.  In addition, interest rates unexpectedly fell to levels not seen in roughly sixteen months.  This resulted from the Fed backing off its October 2018 forecast of at least two interest rate increases in 2019.  The Fed reversed that position and stated that unless data changes, it will not raise interest rates in 2019!  In our opinion, this should be very good news for equity and real-estate valuations.

As we suggested in both our annual thought piece and in our fourth quarter letter, we strongly believed that the fundamentals of the companies we invest in were ignored in the fourth quarter stock market decline.  We do not expect a recession any time soon (perhaps not for another eighteen months); corporate earnings continue to grow although at a slower pace (no new tax benefit this year); employment remains robust; wage growth is ticking up; and consumer and business confidence remain strong, as depicted in the charts below. 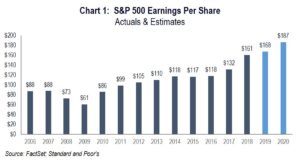 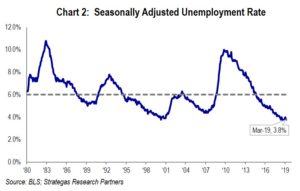 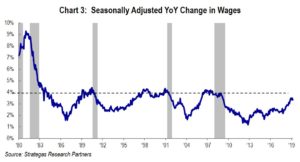 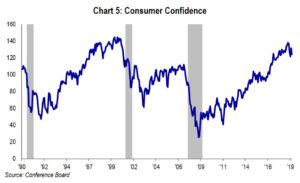 The above depicts a continuation of some of the key factors that we believe can contribute to the continued appreciation of our investments.  However, we do not live in a perfect economic or political world and there are some other factors to consider that constitute the proverbial “wall of worry.”  These include:

When putting all of this together we get a mixed economic picture.  Thus our quote rings true, “we always live in an uncertain world.”  However, we continue to take a long-term approach to investing in what we and our outside managers view as high-quality and reasonably valued companies and real-estate opportunities.  Our heavily weighted asset allocation to the U.S. demonstrates our adherence to Buffett’s view that the U.S. economy (and government) will go forward over time.  From a historical perspective, the robust equity returns in the first quarter suggest that there may be more to come for the balance of this year: 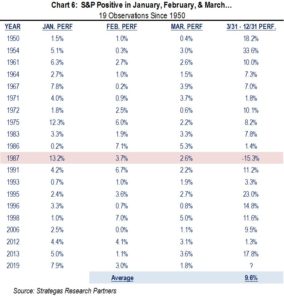 The above chart depicts a historical record which appears very positive.  However, we point out that history is a guide and not a guaranty.  Additionally, in each of these years there has historically been a drawdown at some point during the remainder of the year, although the full-year results have been positive.  Yet it is worth considering that at least one of the outside economic experts we rely on believes that the second half of the year will see an economic acceleration for our domestic economy.  If a trade agreement with China is reached that too can add to a stronger economy on a global basis.  Finally, given the approaching 2020 election cycle, the current administration will be looking to encourage a robust economy.  Of course, given the sudden and unexpected downturn in the fourth quarter of last year, one must not get too optimistic.

Given all of the above factors, our recommended asset allocations for clients continues to reflect a defensive tilt through a greater allocation to our defensive strategies while underweighting fixed income (which in some cases provides a yield less than the rate of inflation) and perhaps a modest underweight to traditional equities if one is concerned about volatility.  The mixed economic picture plus the usual political uncertainty as well as trouble spots around the world make the defensive tilt seem reasonable to us.  Our mandate has always been and will continue to be a return of capital first and foremost, and then a focus on generating a return on capital.

The first quarter was a very good one with appreciation in all of our equity-based strategies.  Of the utmost importance, we believe that valuations are still reasonable.  Furthermore, the relationship between the S&P 500 earnings yield and the ten-year Treasury yield supports that domestic equities are significantly more attractive than fixed income.

This is compelling in our opinion and suggests that further appreciation of equities (especially well-managed high-quality companies with growing earnings and/or growing dividends) is still quite possible unless earnings were to decline in general, which we do not believe will be  the case for certainly the next year or so.

As our quote states, “we always live in an uncertain world” and that remains the case today.  As the rest of the quote states, “what is certain is that the U.S. will go forward over time” which is also still the case today in our humble opinion.  So, we remain cautiously optimistic as do the managers and outside economic consultants we work with.

Please call us with any questions that you might have relating to asset allocation or any of the charts or materials contained in this letter.

*The forecast provided above is based on the reasonable beliefs of First Long Island Investors, LLC and is not a guarantee of future performance. Actual results may differ materially. Past performance statistics may not be indicative of future results. Partnership returns are estimated and are subject to change without notice. Performance information for Dividend Growth, FLI Core and AB Concentrated US Growth strategies represent the performance of their respective composites. FLI average performance figures are dollar weighted based on assets.

The views expressed are the views of Robert D. Rosenthal through the period ending April 18, 2019, and are subject to change at any time based on market and other conditions. This is not an offer or solicitation for the purchase or sale of any security and should not be construed as such.

References to specific securities and issuers are for illustrative purposes only and are not intended to be, and should not be interpreted as, recommendations to purchase or sell such securities. Content may not be reproduced, distributed, or transmitted, in whole or in portion, by any means, without written permission from First Long Island Investors, LLC. Copyright © 2019 by First Long Island Investors, LLC. All rights reserved.