Thought Leadership Series: Who Wins the White House in 2016 – and What Happens Next?

With less than a week to go before Election Day, First Long Island Investors invited Dr. Meena Bose, Executive Dean for Public Policy and Public Service Programs in Hofstra University’s Peter S. Kalikow School of Government, Public Policy, and International Affairs, and Director of Hofstra’s Peter S. Kalikow Center for the Study of the American Presidency, to speak with clients and friends of the firm about the upcoming election. 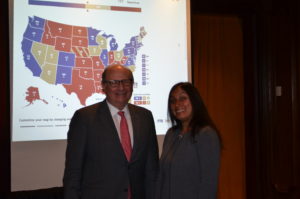 Robert D. Rosenthal and Meena Bose in front of the electoral map

Dr. Bose began her discussion with where the Presidential race is today (as of November 2, 2016).  She reminded the group that while the popular vote is important, it is the Electoral College that determines our next president.  270 electoral votes are needed to win the election – this map explains where the electoral votes are currently and which states are still considered swing states.  After the release of the controversial Access Hollywood tape on October 7th, it appeared as if Hillary Clinton was clearly going to win, but the race has been tightening over the past few days as more information is hitting the media (Wikileaks, potential new FBI investigation into Hillary Clinton’s emails).  Dr. Bose still believes that Clinton will win in the end.  From looking at the above electoral map, you can see that all she has to do is win one or two swing states, while Donald Trump would need to almost run the table.

Dr. Bose discussed campaign strategy and touched on the differences between the Clinton and Trump campaigns as well as shared her views as to how each approach has helped or harmed their chances.

A portion of the discussion focused on the primary races that led to a Clinton vs. Trump general election.

During the Q&A Dr. Bose was asked if Hillary Clinton does become president, how will she move forward given potential investigations around her email server and/or the Clinton Foundation.  She shared that we should expect a Hillary Clinton presidency will come with it scandal and controversy, much in the same way Bill Clinton’s presidency had.  The focus on her email server situation will make it difficult for her to govern.  Hopefully the country can put the past in the past, and focus on the future.

Dr. Bose was also asked if she felt that the country needed a new political party, given that the current Democratic Party is leaning so far to the left and the current Republican Party is so leaning so far to the right.  She does not think a new, third party is likely, as one has never garnered significant support, due to the structure of the American political system (plurality voting and winner-take-all elections), but she agreed that we need a “new” party.  She shared that it is rumored that if the Republicans lose this election, they will clean house and work to redefine the party so that they can come back very strongly in 2020.