With the markets at all-time highs, many investors are wondering when the next recession will be and what the economic and investment landscape looks like going forward.  To help address these concerns, First Long Island Investors invited Bob DeLucia, CEO and founder of Veritas Economic Analysis, LLC to join clients and friends of the firm for a breakfast seminar on June 21, 2017.  Bob DeLucia is an independent consulting economist who held senior economist positions at Prudential Financial and CIGNA before starting his own firm. 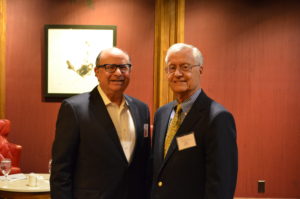 Bob began the session by sharing his point of view on investor sentiment, the economy, and the markets.

After sharing his initial views, there was a question and answer session led by Robert D. Rosenthal, Chief Investment Officer of First Long Island Investors.

Question:  The Fed has been talking about raising rates and reducing its balance sheet.  How will this deleveraging affect markets?

Answer: The Fed has stated that it will continue to raise rates and so far the market has reacted positively to the increases.  In addition to raising rates, the Fed will begin to shrink its inflated balance sheet of $4.5 trillion of government bonds.  While the markets may have an initial negative knee-jerk reaction, the gradual and measured unwinding of the Fed’s bond holdings will have a significant impact on the markets overall.  The current composition of the Fed is dovish and Fed officials do not want to take economic risks.

Question: How much does your forecast rely on the administration’s proposed tax reform and other pro-business agenda items being passed?  How much of it is already baked into the market?

Answer: My models do not incorporate any pro-growth legislation from Congress. My assumption for future stock price gains are not based on price-earnings expansion but rather based on earnings per share growth.  In my opinion there is a low likelihood of comprehensive tax reform being passed in the next year.  Specific tax cuts, for both individuals and corporations, are likely within the next six to nine months.

Question Housing has been resilient.  How is housing doing? How is it affecting the economy?

Answer: Underlying demand for housing is very strong while supply is and will continue to be constrained by limitations on land, labor, and building materials. House prices are rising at a 7% annual rate, and could increase by 5% per year over the next few years.

Question: What are your thoughts on active versus passive investing?