On October 30th, First Long Island Investors had the distinct honor of hosting Lawrence Levy, Executive Dean, National Center for Suburban Studies (NCSS) at Hofstra University, as our guest speaker at a Thought Leadership Breakfast for clients and friends of the firm. 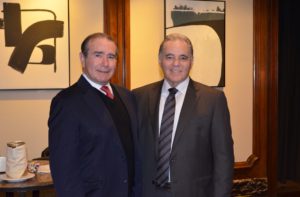 In 35 years as a reporter, editorial writer, columnist, and PBS host, Lawrence (Larry) Levy won many of journalism’s top awards, including Pulitzer Finalist, for in-depth works on suburban politics, education, taxation, housing, and other key issues.  As a journalist, he was known for blending national trends and local perspectives and has covered seven presidential campaigns and 15 national conventions.  In his leadership role at NCSS, which he was invited by Hofstra President Rabinowitz to create in 2007, Dean Levy has worked with Hofstra’s academic and local communities to shape an innovative, interdisciplinary agenda for suburban study, including a new Sustainability Studies degree.

Mr. Levy centered the conversation on the changing demographics on Long Island and how that has impacted education, business, real estate, politics, and more.  He described Long Island as a diversified center for small business creation, at the best it has ever been economically.  Exports are at highs not seen in decades, unemployment stands at 3.5%, and it has been aided by government defense spending as well as small businesses picking up a lot of the economic slack.  On the flip side, he described Long Island as a place with an aging demographic as well as aging infrastructure (bridges, roads, sewers, etc.).  The governmental fragmentation on Long Island makes it extremely hard to get initiatives passed to deal with some of Long Island’s issues such as its aging infrastructure.

The segregation of cultures that exists on Long Island is a core issue.  Long Island currently has one of the highest segregation rates throughout the United States.  This segregation dates back to the 1960’s when practices such as blacklisting, gerrymandering, and pure policy were used to ignite the movement of minority cultures into certain areas.  Banks would reject people of certain ethnicities with equal standards simply because they did not want them taking out a mortgage for a home in certain areas.  This has been detrimental to certain cultures that have spurred growth and diversity in Long Island.

According to Mr. Levy, a multitude of ethnicities have contributed to Long Island’s economic success.  The Asian population, which has been growing at rapid rates, has helped support Long Island’s housing market.  Latino groups continue to bring “new worlds” to communities, with an influx of diverse ideas and capital.  Additionally, people of African ethnicities continue to choose suburban areas throughout Long Island as opposed to moving into New York City.  Long Island has been “very fortunate” to have this cultural diffusion, in the words of Mr. Levy, but the segregation that exists on Long Island has caused some of these minorities to be placed at a disadvantage, particularly regarding the education that children receive in certain areas.  For example, the Hempstead School District offers no advanced placement courses to its high school students, not only depriving them of advanced education but putting them at a disadvantage for continued education in college in comparison to their peers.  According to Mr. Levy, 50% of students on Long Island are non-white, and 80% of them attend the poorest 15 districts (out of 125) on Long Island.  He shared that issues like this only garner attention when they get penned as a “pocketbook” issue.  He is concerned this segregation may never end and could require some external force such as artificial investment or de-stereotyping to make significant strides.

The conversation transitioned to a discussion of the notion that Long Island is being hit on both ends – the aging of our population and that young millennials are not choosing to live on Long Island because it is said to be too expensive.  Mr. Levy disagrees with this pre-conceived notion and pointed to many booming “downtown” areas such as Rockville Centre and Huntington where apartments and housing are quite affordable.  He believes the issue is more that young people are simply being raised to expect a luxurious house immediately after graduation.  In order to combat this issue, there has been a focus on smart growth by which housing development aims to optimize housing for both younger and older residents who may not want a multi-purpose housing unit and converting unused parking lots into apartment complexes to bolster the housing supply.  Naturally occurring retirement communities (NORC’s) have also aided in sustaining the elderly population as reinvestment in the property of these communities (wider doorways, simpler structures) are more appealing to this group.

More about the speaker:

Over the years Larry Levy has forged research alliances with other academic institutions, including Harvard, Columbia, Cornell, Boston College, Virginia Tech, New York University, Exeter, and Maynooths, as well as consulting relationships with not-for-profit groups, businesses and government agencies.  One recent partnership of note, with the world-renowned Schomburg Center for Research in Black Culture, resulted in the heralded exhibition “Black Suburbia: From Levittown to Ferguson.”  Along with Academic Director Christopher Niedt, NCSS has promoted the importance of studying suburbs nationally and internationally and has generated nearly $4 million in grants, gifts, and contracts.  Dean Levy was recently invited to lecture at the Harvard Graduate School of Design and the Harvard Medical School on the challenges of the changing suburbs and gives about 30 talks a year to academic, civic, and business groups on a variety of topics.  As a member of a Brookings Institution advisory panel, he was a featured speaker at a Brookings Metro Policy Summit in Washington, DC.  He was recently appointed Chairman of the Community Research Advisory Board at the Feinstein Institute for Medical Research, one of the world’s leading such centers.

About the National Center for Suburban Studies (NCSS):

NCSS has collaborated on a number of local, national, and international scale conferences on aspects of suburban life, from diversity and housing, to ecology science and health care.  The center also has participated in major consulting studies on sustainability, demographic change and education and health care challenges in suburbia.  At NCSS, Dean Levy has co-authored major regional studies, including the LI2035 Sustainability Action Plan, all five Long Island Regional Economic Development plans, and many of the post Sandy recovery reports for Suffolk County communities.  Before joining Hofstra, he was Senior Editorial Writer and Chief Political Columnist for Newsday; cohost of the PBS show Face-Off, and remains involved in the world of journalism and politics.  Levy has been a guest contributor to BBC.com, CNN.com, Politico, Newsday, Citiwire, and Hearst Newspapers and wrote about presidential campaign issues for the New York Times.com Campaign Stops blog.  (Most of these articles and some of the media appearances can be found at the NCSS website www.hofstra.edu/ncss).  He appears regularly on local and national television.  He is a graduate of Boston University’s School of Communication.  He’s especially proud of organizing the Hofstra Celebration of Suburban Diversity, which annually brings together hundreds of people from different races, religions and other backgrounds and has raised more than $1 million for diversity related scholarships, research and community engagement.  At the same time, the event, which has featured the region’s most influential business and labor leaders as keynote speakers, has dramatically raised Hofstra’s profile as a place that values diversity.  He also is pleased to be able to “give back” by mentoring many young people in journalism and public life regardless of their ideological or political allegiance.