Terrorist attacks, both large and small, are an unfortunate reality in today’s world.  The proliferation of radical & extremist ideas through online platforms and social media channels has exponentially expanded the reach of terrorist organizations around the globe.  On November 9, 2017, First Long Island Investors invited Dr. Tara Maller, Senior Policy Advisor and Spokesperson for the Counter Extremism Project, to discuss this epidemic with clients and friends of the firm.  The terrorist attack in New York City on October 31st and December 11th made this topic only more timely and relevant. 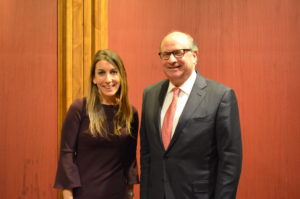 Dr. Maller began the session by providing some background on the work of the Counter Extremism Project (CEP), a not-for-profit, non-partisan, international policy organization formed to combat the growing threat from extremist ideology.  Led by a renowned group of former world leaders and former diplomats, it aims to combat extremism by pressuring financial support networks, countering the narrative of extremists and their online recruitment, and advocating for strong laws, policies, and regulations.  You can learn more about CEP’s work at www.counterextremism.com.

She explained that through military efforts and cooperation with ally nations, we are in fact making progress against terrorist groups like ISIS and others on the battlefield.  However, we are falling short with regard to interfering with their efforts to spread their message globally through social media and radicalize people with whom they have never had face-to-face contact.  Terrorist activities like the October 2017 NYC attack, the September 2017 attack in London, the 2016 shooting in Orlando and many more are the result of ISIS and others using platforms like Facebook, Twitter, and YouTube (which is owned by Google) to reach, recruit, and radicalize people they have never met.

Online radicalization plays a significant role in terror attacks.  In many ISIS-inspired terrorist attacks, the attackers have had minimal to no direct in person contact with ISIS nor have they travelled to places like Iraq or Syria, where ISIS had previously held significant territory.  Instead, they are exposed to terrorist materials online and latch on to the propaganda.  From the investigations made public we have seen that these individuals are consuming a massive amount of radical content online.

Tara shared that her organization has been part of the push in the last few years to get the social media companies (primarily focused on Google, Twitter, and Facebook) to more aggressively thwart the dissemination of radical terrorist and extremist propaganda (i.e. videos of beheadings) on their platforms.  While there has been some progress, there is still significantly more that could be done by the tech community.  CEP, and others, are lobbying the tech companies to simply enforce the terms and conditions that all users have agreed to when signing up for the platform which prohibit this activity.

Tara also discussed the more aggressive approach social media platforms take with regard to child pornography on their platforms.  In the case of child pornography, there is a huge database of images determined to be child pornography catalogued by the National Center for Missing and Exploited Children and PhotoDNA technology is used to block anything in that database from being uploaded to these platforms.  This PhotoDNA technology was Microsoft-backed and developed by Dr. Hany Farid, Chair of Computer Science at Dartmouth College.  Dr. Farid is now also a Senior Advisor to CEP. CEP has been pushing for a similar approach to keep terrorist content off the sites.  You can learn more about this technology here.

There has been a significant amount of attention paid to this issue recently, particularly in light of the recent tech company hearings on Capitol Hill. While the hearings were focused primarily on Russian activities on these platforms during the 2016 elections, the tech companies appear to be coming under increasing scrutiny regarding a range of problematic activity on their platforms.  Hopefully, this continued pressure will lead to more progress in taking actions against terrorist content.  One positive development was mentioned recently in a  New York Times article regarding the removal of terrorist content, specifically Anwar al-Awlaki videos,  on YouTube.

One of the major issues with these online platforms is the opportunity for complete anonymity.  You can have a fake name online and you can have multiple accounts making it nearly impossible to locate and prosecute violators.  Platforms like Twitter, Facebook, and YouTube were set up to be online communities and the application of these platforms by terrorists to incite violence and by Russia to involve itself in the 2016 election are unintended and problematic consequences.  These platforms did not anticipate this and therefore were not set-up to initially track and monitor much of this activity.  All three of these companies have recently been on Capitol Hill in hearings discussing how they address these issues today and how they intend to make reforms going forward.  The hearings were predominantly centered on the Russia investigations, but also addressed other issues including terrorism.

Tara closed by discussing the challenges that surround this issue.  There is the obvious debate that centers on the First Amendment and censorship.  Having said that, Tara pointed out that these are companies with terms of service governing what is and is not acceptable on their platforms.  Additionally, the tech companies are concerned about their user’s right to privacy, citing that many individuals are concerned with what information is being funneled to the government and others.  Organizations like CEP are advocating to ensure that all users abide by the terms of service that govern these online communities and that these platforms do not provide virtual safe havens for terrorists.

Dr. Tara Maller is a national security expert with extensive media and communications experience.  She serves as Spokesperson and Senior Policy Advisor for the Counter Extremism Project (CEP).  Maller has appeared as a regular national security and foreign policy commentator on Bloomberg, CNN, MSNBC, Fox News, Fox Business, Al Jazeera America, and HuffPost Live.  She has published and presented on a wide range of issues including sanctions, diplomacy, intelligence, nuclear proliferation, terrorism, Iraq, Iran, cybersecurity, homeland security, national service, and women in security.  She was previously the Director of Strategic Communications for the newly formed Service Year Alliance, a joint venture of the Aspen Institute and Be The Change.  The Franklin Project at the Aspen Institute, where Maller served as Associate Director of Strategic Communications, is now part of this new venture.  She is also a research fellow in the International Security Program at New America.  Maller previously served as a military analyst at the Central Intelligence Agency, where she focused on the Iraq insurgency.  She has also worked in the private sector at a NY-based media startup, BrightWire Inc., where she served as Managing Director of Operations and Managing Editor.  The company provided curated & custom international economic and political content to corporate clients.  She has also done work in the private sector as a security consultant focused on cybersecurity & terrorism threat assessments.

About The Counter Extremism Project (CEP)

The Counter Extremism Project (CEP) is a not-for-profit, non-partisan, international policy organization formed to combat the growing threat from extremist ideologies.  Led by a renowned group of former world leaders and diplomats it combats extremism by pressuring financial and material support networks; countering the narrative of extremists and their online recruitment; and advocating for smart laws, policies, and regulations.  For more information, please visit www.counterextremism.com